Find a location with good light for a portrait shot. Place your subject some distance in front of a simple background and select a wide aperture together with a moderately long focal length such as 100mm on a 35mm full-frame camera (about 65mm on a cropped-frame camera). Take a viewpoint about one and a half metres from your subject, allowing you to compose a headshot comfortably within the frame. Focus on the eyes and take the shot.

Capturing portraits has always been one of my favourite things as a photographer. Utilizing every aspect of the craft, your brain’s firing on every cylinder.  For this project I want to display my knowledge and experience in portraiture. It’s one of the cornerstones in contemporary photography. By using the visual language, we can portray emotion and invoke ideas within the viewer’s mind. Using focusing to direct the viewer’s attention can also project creative concepts and ideas. Using the bokeh, controlling the lenses focusing mechanism – these are all the ways in which we execute these ideas. With improving Auto-Focusing technology, we’re now able to capture people in environments and places we never could before. For example, a portrait which would take a considerable planning can now be taken on an iPhone and become viral within seconds of it being posted. The process of using manual lenses offers precise control, this is why I almost exclusively use them. A computer cannot read your mind, there’s something intriguing using vintage lenses in contemporary photography, they seem to develop a more nostalgic look and have distinct personalities. 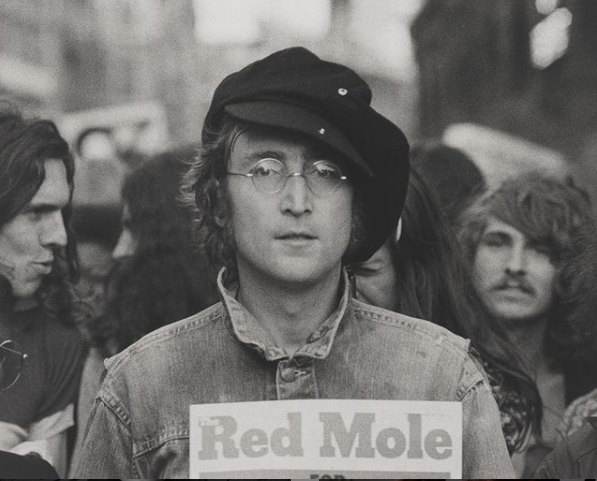 Roland Scherman’s portrait of John Lennon has a rather traditional composition, you have some even light on the face. I think it’s most likely the subject and setting that provoke that visceral reaction. For this project I decided to have a look at the National Portrait Gallery, I wanted to see a wide variety of work spanning across every category. I think the most important thing to do with projects like this is to look back in time throughout history. I think the depth of field is relatively modest, displaying the crowd behind him whilst still retaining that bokeh blur.

Taking to Instagram, Rico Reinhold’s portrait of Louise Fankhänel has an interesting approach when it comes to lighting. I think the warm colours contrasting with the deep black values on her clothing culminate together to create a really beautiful colour palette. I think colour is one of the most important things in portraiture. A lot of the mood in this scene is represented by its use of colour. For example if we injected cooler colours into this image by affecting the image’s temperature it would change its entire tone. I also think it was very brave to only illuminate half of the face, traditional lighting techniques (although incredibly important for professional work) wouldn’t translate well. The lighting could suggest a few things, perhaps she’s the first face you see when you walk through the door, perhaps the last face you see before you leave – this compliments the facial expression well also. The soft focus is utilized very minutely, you can tell he’s shot this with a wider aperture as the background is clearly blurry, not to mention her hand on the left was clearly overexposed before he’d edited it. You can see that he shot this image 1-2 stops higher than he would before lowering the exposure in post to retain shadow content.

Nicolas Corradi is another photographer who utilizes depth of field to his advantage, as you can see in this image of american fashion model Katie Loo. I think the composition on this is quite nice. If it weren’t for the overexposed regions which he’s tried to save in post this image would be flawless. A lot of portrait photographers like to overexpose skin slightly and open the lens up fully, this makes surfaces such as skin look smoother. The same way Sony A7 Car photographers deeply underexpose their images to retain reflection details when they pull them up in post, a good example of this can be seen in Mike Crawat’s work:

As you can see Mike Crawat is amongst a lot of contemporary photographers who are fully utilizing shooting .RAW images as opposed to regular .Jpegs. This is what I am going to be doing with my portraits by overexposing. You don’t have to do it by a lot, but if you know your camera has enough dynamic range to handle it, why not? If it makes the finalized image look even better than so be it. In portraits, the framing and skin tones are arguably some of the most important aspects but you need context in order to make it impactful. That picture of John Lennon would never be as intriguing or intense as it is considered today without the subject and setting.

As you can see with a shot like this from my 2015 collection ‘Fade Away’ which won 4 photo competitions including an award for Best Portrait. I took full advantage of my Canon 7D’s dynamic range. I overexposed the image by 1 full stop to allow the light to fully pass over her face, slightly illuminating the tip of her nose. I think positioning was the most important aspect of this shot, although the background is almost completely white I do like the way it only accentuates the subject. I wanted to have the light pierce through the hair, run in the creases in the face. As I was saying earlier as well with colour, you can clearly see we coordinated the scene with clothing, lighting, I graded the skin tones the same way.

Here is another example of some of the work I did for College Music on Youtube, this was also in my Fade Away collection. As you can see I used that exact same technique, I’m still able to get soft and detailed images that have a vibe and set the mood well. With College Music mostly using images that are muted, faded, dark and somewhat melancholic – I needed to abide by a strict set of rules to be included on their Youtube Channel. By utilizing a single purple gel on a 800w photo lamp with restricted bounce I was able to construct a multilayered image with depth and emotional value. As I said earlier about deliberately over or under exposing, you can play around with the scene. Alter the images, you can make a bright room look dark, you can make a candle light look bright – anything is possible.

This is the image I chose to represent my finalised ideas, in this piece I wanted to make sure I tackled every medium. I challenged myself by using Black and White and using a relatively low contrast. I didn’t want the image to ‘pop’ so to speak. I wanted to keep the skin tones on the lower spectrum. There’s no real ‘highlight’ as far as colour. But the image is consistent and relatively finalised. I could have probably given a wider look, maybe taken a few steps back and revealed more of the background in retrospect, but I think the focusing on the eye and the lighting on the face using a 600W bulb and reflector has produced a soft sort of daylight effect. The focusing is very clear, I shot this image on iso 100 with my aperture at F1.4. I used an LED display in the background, the screen is very matte so you don’t tend to get too much of a bounce from the bulb. Now, I know this isn’t an outdoor scene, but doesn’t it look like one? I’m proud of the lighting on this image. Although there’s much more to learn in the future.