For this exercise I chose to utilize my knowledge of the 180’ rule and the rule of thirds, which divides an image into 9 separate yet defining segments. A surprising amount of young photographers are unaware of the rule, yet instinctively use it everyday without even realizing. I found the rule particularly useful when combined with the brief, as they seemed to go almost hand in hand. Although I wasn’t supposed to make the point so obvious within the frame, I thought it would also be an interesting experiment to show how point placement affects tension and intrigue within the defining lines of a frame. I needed to select points that weren’t obvious, but kept the point easy to see with visual intrigue and tension. I had a specific exercise in mind that would display the importance of points within photography.

Russian street photographer Zalman Shklyar utilises things in an interesting way. His incredibly use of perspective, shadows, and most importantly his use of Points are consistent throughout all of his works. In the image above we see a striking silhouette gazing at a lady in the distance. The perspective follows the man’s point of view.

These images are really intriguing, and I think the the way he composites these images definitely help the overall look. The point in the image above really gives you a sense of scale, he’s also lined up the point with the person on the right hand side of the image to create a line, I think the timing of this image is really great.

This was the first image I took, I chose my point and fired away. I kept the point straight forward, I also wanted it to be completely symmetrical, but give the sky some breathing room. I shot this photo through the grass as well, to feel like we were on the same level. I usually experiment with foreground elements. Our eyes see in three dimensions and photography is a two dimensional art for, so breaking images down into their segments and blurring those lines can make for a really pleasing image. I’m not saying the image is perfect, I would have probably shot it landscape if I were to do it again, but I think it’s a great starting point for identifying points in an image.

Roger Deakins is one of my favourite cinematographers, and for me his use of point to create a sense of perspective and depth is unparalleled. I take a lot of inspiration from his works when it comes to my final edit. The uses of symmetry, colour and the overall intensity of the image are all things I like to keep consistent.

I wanted to do something industrial for this test, I wanted a gate with complete symmetry either side. I wanted to come at this from a more minimal point of view as more of a simple exercise to gain deeper understanding to the use of points in photography. I used this setting in my project Nightfall. I wanted a consistent tree line with several different layers. On the image below you can see a diagram for which would have become the final image:

As you can see it was just rough estimation, I couldn’t remember the environment too specifically but I needed to get the image down before I forgot it.

As you can see I got it quite close. The reason I liked this composition is because the trees are incredibly consistent. The opening of the gate is directly in the middle of the shot, the Point being the little sign. For some reason I thought it was ironic to have a gate so big with signs so small. I like the irony is slightly lost in this composition. I don’t think the intention of the image is clear at all either. I like the muted colour but I think there could be a little more saturation. Some ideas just don’t work out how you image them, I think this is an example of that. 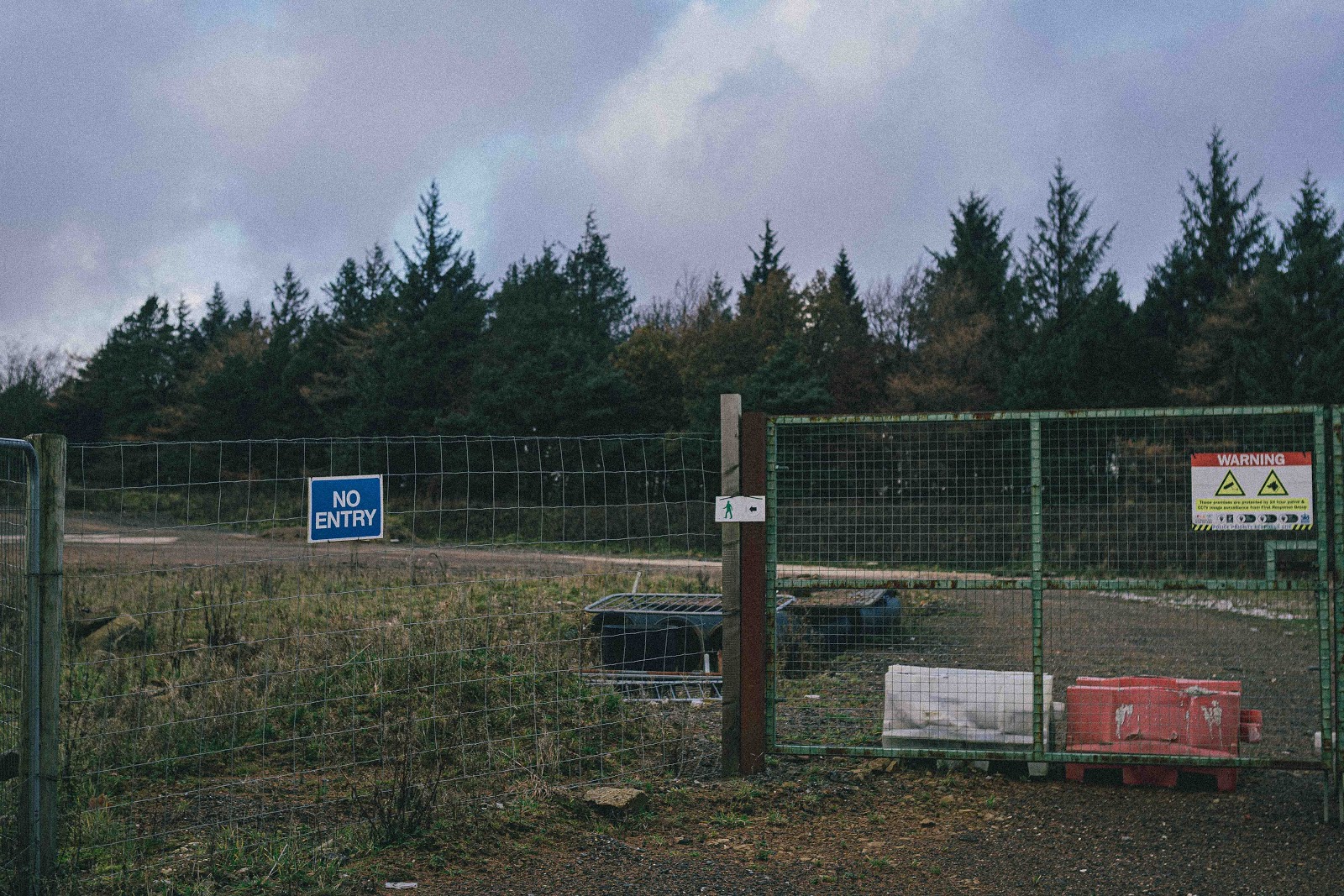 Shifting the point around didn’t help either, I also think the cloudy weather perhaps didn’t help either. I could have just put in black and white, but I wanted there to be at least some intrigue. The point is nowhere near as impactful in this composition, instead, you focus on the Blue sign. This is where you can obviously see my attempt at creating the line, I blame this on the overall idea of the image not being as vivid as I’d previously remembered in my diagram.

I was quite fond of this particular composition, I did almost exactly the same but on the other side. As you can see, the placement of the point within this particular image is even less clear, so as the viewer we’re almost immediately trying to locate the meaning of the image, if any. I like the sky intruding through the right of the image, the sky has a nice colour and the clouds look good. I think the the reds look nice as well.

For these images, I would further play around with the point in the image. I saw this on the way back from a long drive out. I couldn’t leave without taking it. There’s a lot going on in the frame, and you can see hitting it head on wasn’t the most effective angle. I think the main thing I’ve grasped from this exercise is to keep it simple. I established the line, and then played around with each image, working with the environment. The fourth image is my favourite, initially there was a nice ray of sunset coming through but I decided to tone that back a little bit for the sake of consistency. I think there’s a lot of themes in these pictures. This house in particular used to belong to a hoarder, he would always keep massive busted cars parked up outside of his house. There used to be a massive off roader parked in this exact spot, not a toy truck. You can see in the following images how chaotic and beautiful this area was to shoot. The sky was quite overcast, you couldn’t see many clouds at this point. I tried to be a little bit more creative with these particular shots, I wanted the peculiar angles to reflect how distorted the house was. As you can see the neighbouring property was incredibly prestine in comparison, I would have developed this concept further in retrospect. The car was later removed from this spot, so even if I were to reshoot It would not be as consistent. I do really like the imagery of the truck on top of this tiny mound, you really get a sense of scale with the placement of the red Lexus. I moved the truck around in the shot, my intent was to display different and somewhat odd angles. I’m not saying that I went too crazy, but I added a bit of tilt to somewhat emphasise the peculiar nature of this house.

I love to play around with foreground elements, there’s something aesthetically pleasing about seeing the image ‘through’ something – even small green elements are emphasised. Adding this sense of perspective and scale, you can see three dimensions of imagery. The foreground placement is emphasised, therefore the viewer gets a sense that they’re seeing more dimension.